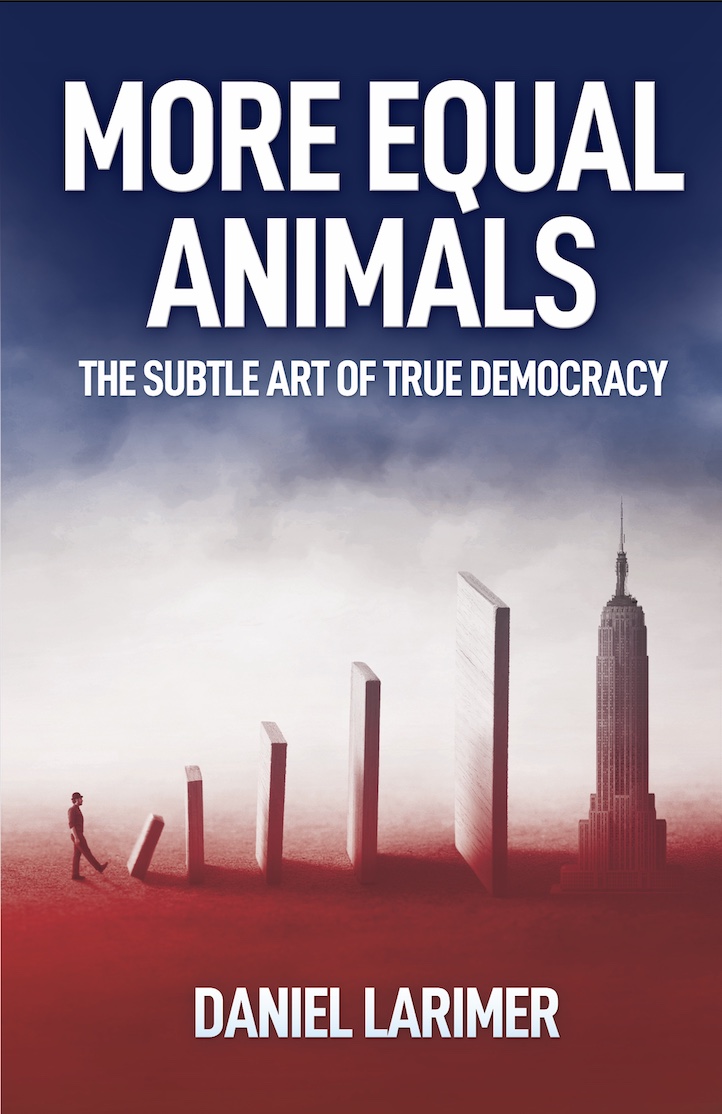 Today I am excited to announce that my book, “More Equal Animals - The Subtle Art of True Democracy” available for download by all. In the near future it will also be available in print.

This book represents the culmination of years of research and soul searching. Its contents give a roadmap for humanity to rediscover how to live in peace without creating institutions that eventually fall to corruption and tyranny.

In this book we will explore new democratic processes designed to encourage consensus building rather than division into political factions. Imagine for a moment a democratic society governed without party politics, politicians campaigning, mudslinging, identity politics, ballot stuffing, gerrymandering, incumbent advantage, special interests, or debates with the authenticity of a WWE wrestling match. Imagine for a moment that there was a way to change the system without a violent revolution and without needing the cooperation of the prevailing political parties. All of these things can be addressed with a system that empowers the people to hold their government accountable.

Political consensus is the process by which people reach agreement about the nature and structure of government. The intent of this book is to provide practical approaches for improving your life and that of your local community for generations to come. The ills of society are an emergent property of the philosophy of the people, so in this book I lay the framework for a new approach to, and philosophy of a true democracy. Once the principles are understood, I will present a strategy to realize many benefits of applying the philosophy to your life today, without having to get everyone else in the world on board first.

Is government necessary? If so, how should one judge the legitimacy of a government? Where do governments gain their power? How do we even agree upon the purpose and powers of government? Assuming we agree on a purpose, who is the judge of the effectiveness of a government in pursuing that purpose and how do we fix a government which is failing to perform the job it was created to perform? These are the questions I seek answers to and I invite you to join me.

As I write this book in the summer of 2020 the world is on fire. People are divided like never before and I fear the civil unrest will only get worse unless everyone can come to their senses and realize our common humanity. If we cannot agree on and respect a societal dispute resolution process then what alternative outcome can we expect?

I can’t help but recall a scene from the ABC TV show “Lost”. Survivors of a plane crash are stranded on an island with mysterious monsters and natives that are attacking them while they wait for rescue. Tensions mount and the survivors start fighting amongst themselves when a character named Jack steps in and makes an impassioned speech calling people to work together, saying, “If we can’t live together … then we are going to die alone”.

This book is my call to stop the fighting and find a way to live together. It is time to realize that we all have a common interest in peace, prosperity, and a future for our families. I am asking you to take a moment and let go of your ideologies and triggers and approach this book with a humble spirit and open mind.

Consider for a moment that everything you think you know just might be wrong or incomplete. I can assure you that your ideological enemies have some legitimate concerns that you would be a fool to ignore. How exactly do you plan to deal with those whom you disagree with if and when your faction/party gains power? How exactly will you respond if they resist? Will you resist if your faction loses power? If we don’t open the lines of communication and establish a new way of working together then the fighting will eventually escalate to slavery and genocide. Hopefully we have enough shared humanity left to agree that slavery and genocide are undesirable outcomes.

Over the past 15 years I have pursued non-violent means of organizing society and have adopted and discarded many different ideologies and philosophies. In the process I have discovered first principles that have allowed me to integrate the truths buried within capitalism, libertarianism, socialism, Marxism, Christianity, and atheism. As a consequence I can guarantee that something I write may trigger you or challenge your pre-existing notions. With any luck this book will bring everyone together.

I ask you to consider that our language is under attack and the very words we use to communicate are being subtly redefined or even multiply defined with contradictory meanings. There is no longer any agreement on fundamental things such as God, natural rights, or morality. We can’t even agree on how many genders there are. The very words “capitalist”, “socialist”, and “communist” mean vastly different things to different people. Everything has become subjective and in the process our ability to communicate and compromise is rapidly declining.

It is for this reason that I attempt to make the minimum possible assumptions in the hope that there is still some foundation we can build upon to achieve peace. When two people have a disagreement they can either fight to the death, live and let live, or agree to a process of dispute resolution. If we can’t live and let live, then agreeing to a dispute resolution process is preferable to a bloody conflict in which we kill and are killed.

The crisis we face today is a crisis in our existing dispute resolution process, our “democratic” process. We no longer trust our political processes to reach consensus in an agreeable way. Our elections have become a choice between bad and worse or dumb and dumber. Half the population doesn’t trust that the votes are accurately counted. A poll I posted on Twitter revealed that over 14% of the 533 respondents will publicly admit to be willing to facilitate election rigging, and over 20% would support rigging an election at least some of the time. The major media and social media companies actively censor the sitting president and any politically inconvenient stories. We, the people, have lost control of our government which has been captured by an elite few pulling the strings behind the scenes. These elite can only remain in control by fostering division and preventing consensus building. We the people must work together to reclaim our power from those who subvert democracy.

Whether you are an anarchist, voluntarist, capitalist, socialist, communist, Christian, Marxist, atheist, or racist, I am asking you to put aside your utopian policy agendas and fear of other ideologies just long enough to consider a new way to reach consensus that we can all live with. I ask you to consider that the truth eludes us all and putting any ideology (whatever it may be) in power to the fullest is likely to backfire in ways we could never imagine. Even more important than our ideologies and philosophies is our consensus building and measuring process. If we cannot reach consensus and maintain it, then any utopia is unstable because a person convinced against their will is of the same opinion still.

Society breaks down when any aspect of consent breaks down or is corrupted. This is what is happening today and today’s outcome is predictably derived from fundamental, mathematical, algorithmic, game-theoretic flaws in our implementation of democratic principles. It is not enough to “drain the swamp” and “vote them out”. The rules of the game ensure that the government will evolve toward corruption and away from democratic principles.

Please sign up to my news letter below to be notified when the print edition is available. In the mean time, you can continue reading by downloading the the PDF.

« The Next Step in Defending Freedom of Speech